The earliest evidence of this concept is the Irving-Williams Series of stability of metal complexes. This states simply that for a given ligand, stability of the +2 ion is in the order:

This is essentially due to decreasing size, and in the case of the Transition Metals, also Ligand Field effects.

It is also noted that certain ligands prefer certain metals, for example Al3+, Ti4+ and Co3+ favour one type of ligand while Ag+4+>, Hg2+ and Pt2_ another. These were then classified as type-a or type-b. Type-a was largely the metal ions of Group 1,2 + lighter Transition Metals in high Oxidation States, + H+. Type-b were the heavier Transition Metals and lower Oxidation State metals. Ligands can also then be classified based on their preference for a or b.

H+ is the hard acid, Hg++> the soft acid. For a Hard Base B, the reaction goes to the left, while for a Soft Base B the reaction goes to the right. However the borderline between hard and soft is relative, and so there is no sharp divide. For example, all alkali metals are "hard", but Cs+ is significantly softer than Li+. Similarly R substituents on the ligands greatly influence the hardness/softness, e.g. for PR3 when R is electron-withdrawing the softness is reduced. Borderline acids are typically 1st row Transition Metals from Iron to Zinc, Pb2+, NO+, while bases are typically Br-, N2, SO32-. There are plenty of others.

It is important to make the distinction between Hardness and Softness and Acid/Base Strength. Hardness/Softness has already been defined as the special stability of hard- hard and soft-soft interactions, but Acid Base Strength must also be defined.

Acid Base Strength measures the inherent acidity/basicity of a given acid or base. Measurement requires non-competing solvent effects and therefore is best done in the gas phase.

The inherent basicity is the base’s proton affinity, and this is the energy released from the reaction: B + H+ → BH+. This can be measured using Born-Haber cycles, and the largest known to date is that for N3-.

The inherent acidity is thus proton loss, that is HF → H+ + F-. The more endothermic this reaction is, the weaker the acid. For Lewis Acids, proton’s must be disregarded and the obvious quantity to use instead is electron affinity (same value). Thus a large electron affinity means a strong acid. The EA of a monopositive cation is equal to the EI of the metal atom. Thus it makes sense that Group 1 & 2 metals are weak Lewis Acids, while the Transition Metals are stronger.

The measurement of acid base strength can be converted to solution chemistry by instead considering the enthalpies, as -∆Hf = EAEB + CACB. E corresponds to the susceptibility of the acid/base to electrostatic forces, while C to the susceptibility to covalency. Thus electrostatic acid & base is stable, while a covalent acid & base also form stable. This allows for the prediction of those complexes not measurable. It also usefully contrasts ionic and covalent tendencies for acids and bases.

This simple estimation was later modified to include a -W term, which was RATB and measures the charge transfer occurring as well (receptance / transferance). This takes into account the variation of H+ acid strength in solution / gas phase. As a gas, H+ accepts a great amount of electron density, while solvated H+ is expended this energy already and so the transfer energy is lowered.

With these definitions considered, we can look now at the distinction between Hard/Soft and Strength. A good example are the bases -OH and F-. They are both hard and form stable complexes with hard acids, but the hydroxyl is 1013 times as basic.

The key concept here is that stronger softer bases can displace weaker harder bases from a hard acid like H+, i.e. strengths of base forces reaction in spite of hard-hard considerations. The trend of the Irving-Williams series shows this well, as it is essentially a measure of increasing acidity of M2+ and superimposed upon this is a hard-soft factor. The hard-hard factor only tends to be favoured for acids/bases closely related in strength, and is just a general trend due to the extra stability it confers.

As such, it is important to consider how this extra stability comes about.

The theoretical basis for the hard-hard interaction is taken primarily from an electrostatic viewpoint. Typical hard acids/bases such as Li+ and F- are all typically classed as ionic compounds, so this is valid. The electrostatic (or Madelung) Energy of an ion pair is inversely proportional to the interatomic distance, so smaller ions have greater attractions. Thus, hard-hard favours small ions such as Li+ and F-.

The electrostatic argument cannot be used for soft-soft interactions as the Madelung Energy would be weak. Thus, it can be extrapolated as a covalent factor, so polarizing power and polarizability of the electrons becomes important. Thus soft transition metal acids with dn electrons where n >= 6 show soft-soft interactions (particularly d10). The polarisation effects here resemble Fajans’ ideas.

Fajans’ Rules - originally came about to consider partial covalent character in ionic compounds. They consider the effect of a small highly charged cation on an anion. A large soft anion means the cation polarises it. The extreme of this is the cation penetrates the anion’s electron cloud to share electrons in a covalent bond. There are 3 rules to estimate the extent of polarisation:

The combination of factors above give rise to the Hard-Soft Acid-Base (HSAB) Theory. Attention was then given to the frontier orbitals (HOMO and LUMO) in order to better develop the understanding of the bonding involved.

Presence of low-lying unoccupied Molecular Orbitals capable of mixing with the ground state accounts for the polarisability of soft atoms. The consequence of polarisability was distortion of the electron cloud occurring to reduce repulsions and enhanced σ-donation and π-backbonding. Thus soft acid/bases better at π-bonding. Note that longer σ/π bonds are not as strong, hence Se, As, Te, Sb are not as soft as S, P. This is because they need overlap. This is also why CO is so good, being small.

NO contains unpaired electron, and bonding to metal involves:

If NO bends then metal can accommodate additional 2 electron donor ligand. The 18 Electron Rule can be used to rationalise the geometry for coordinated NO and related ligands.

The most common geometry for transition metal complexes. 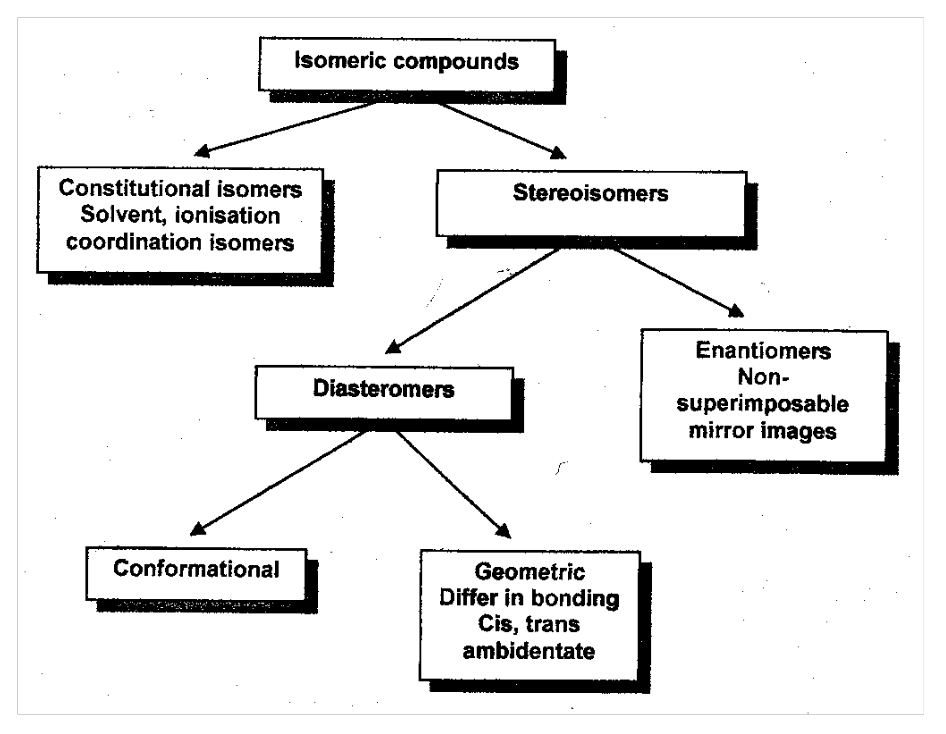 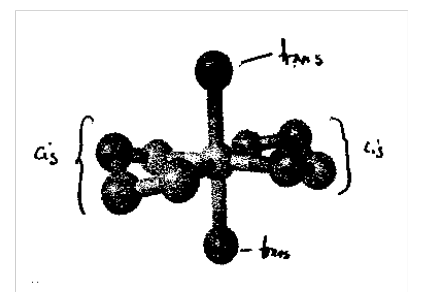 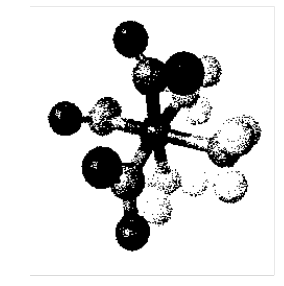 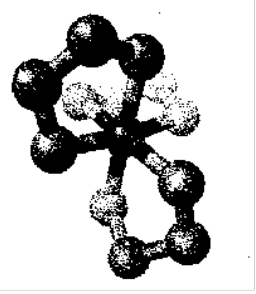 Note that the molecule Mabcdef (i.e. 6 different ligands around M) has 30 stereoisomers and 15 enantiomeric pairs!

Dithiolenes are examples of “suspect” ligands - can be viewed as neutral or 2-ligands.

WMe6 is another example. 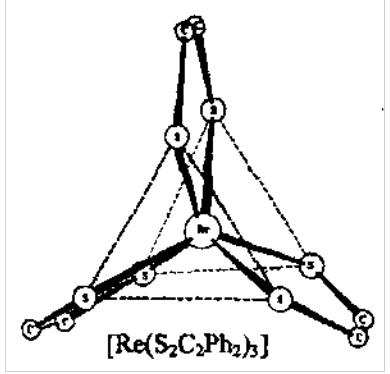 Tetrahedral geometry most common for 4 coordination. Can be distorted for same reasons as octahedral.

Can have optical and geometric isomers.

Diamine complex on the right is enantiomeric: 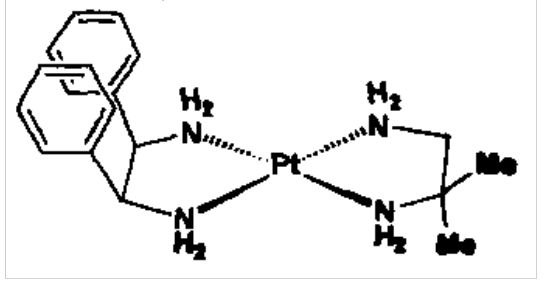 Trigonal Bipyramidal and Square Based Pyramidal. The energy difference between the two forms is often small.

The latter often has multiply bonded ligand in the axial site, with high trans effect. 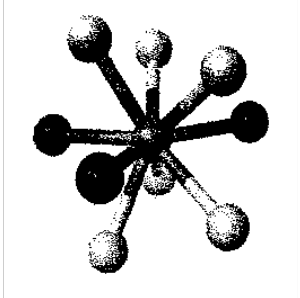 Also for lanthanides with bidentate ligands with small bite angles.

Many compounds that appear to have low coordination such as CoCl2 are in fact polymeric with halide bridges (or the structure can be viewed using a close packing model).

Two Coordination is common for d10:

Three Coordination is often of the trigonal planar geometry. Groups 11 and 12 again favour low coordination, and 3 coordinate complexes are known for Cu and Au, e.g. [Au(PPh3)3]+.

Also, steric crowding can lead to this coordination number, e.g. in complexes of the type [M{N(SiMe3)2}3]. 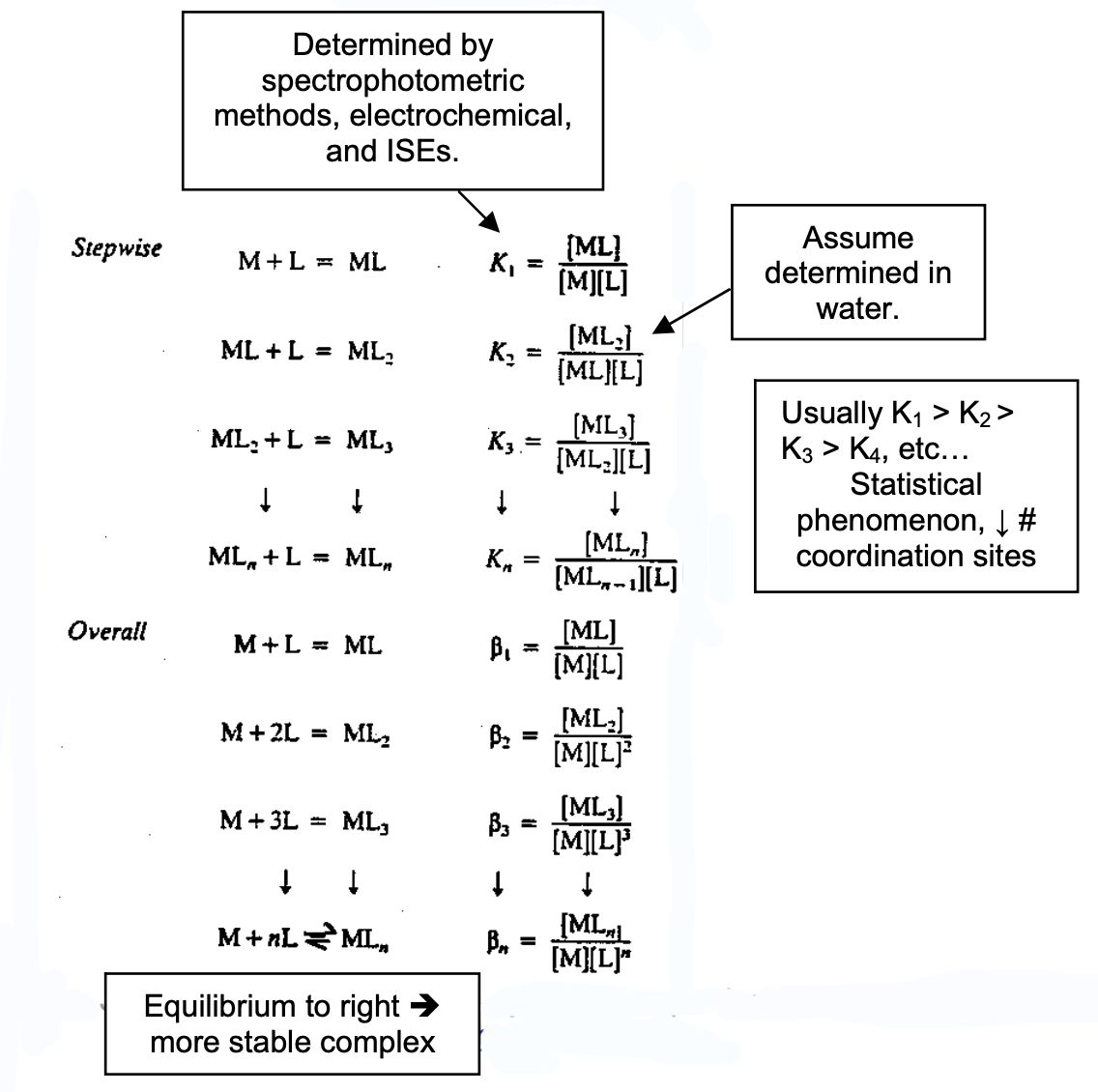 This can be explained statistically, as:

Depending on which is displaced, i.e. fewer ligands available for displacement with each step.

Steric factors - L’ may be bigger than L.

Any deviation from that trend is usually the result of a major change in the electronic structure of the complex, e.g. change of geometry.

Copper(II) - Ammonia. Consequences on K5 and K6 of the Jahn-Teller effect - unusually weak bonding at the 5th and 6th coordination positions. Hence, Cu(NH3)62+ can only be obtained in liquid ammonia 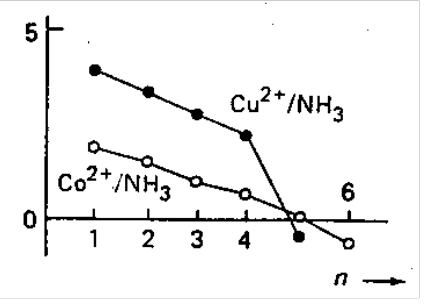 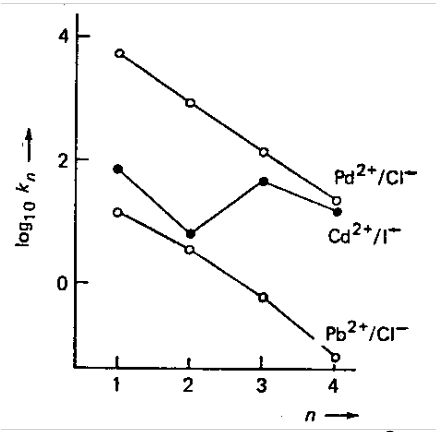 Similarly, stepwise stability constants for Cd2+ with Br- would be expected to decrease from K1 to K2 to K3 to K4. However, there is an increase from K3 to K4. This is because of adoption of the tetrahedral [CdBr4]2- as water ligands are ejected from [CdBr3(OH2)3]- (entropy driven). 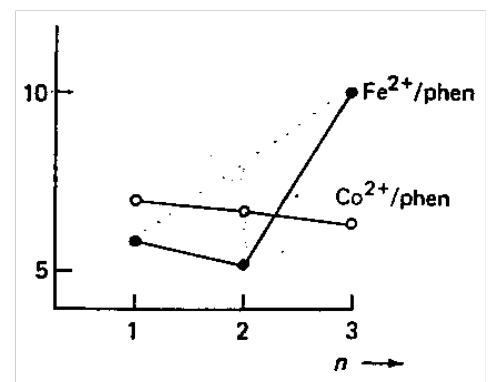 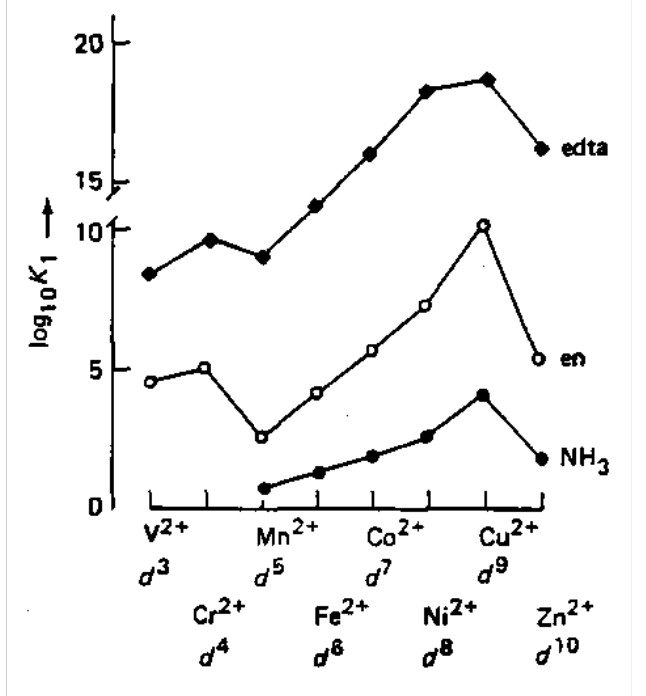 Also see a similar trend in -∆H, i.e. the trend is insensitive to the nature of the ligand. Peaks at Cu2+ are due to Jahn-Teller distortions (destabilising). Ligands in the plane are stabilised, while axial often do not bind at all.

Across the period, Zeff increases, radii decrease, Lewis Acidity increases, and stability as a result increases. This all implies a stronger M-L bond.

This is known as the Irving-Williams Series - the dependence of stability constants and formation enthalpies on d electron configuration for high-spin complexes of first row transition metal 2+ cations.

The Chelate and Macrocyclic Effects

Enhanced stability of chelate rings as compared to a similar monodentate system. Both entropic and enthalpic contributions: 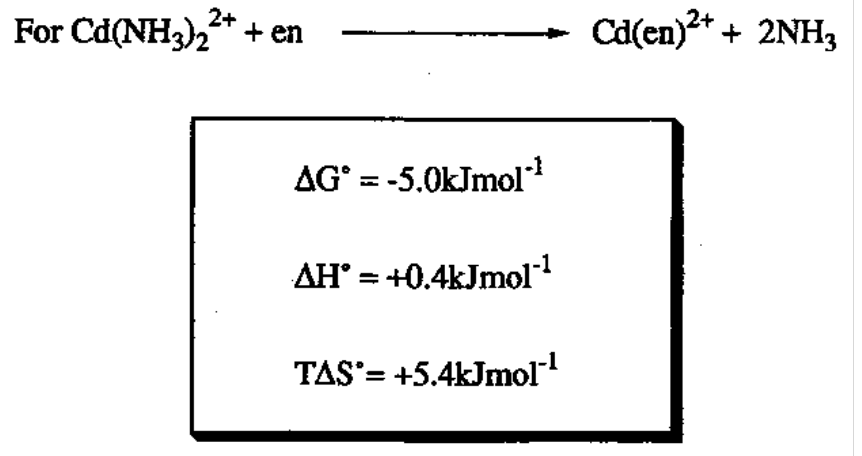 Entropy driven as more free molecules in solution as each ligand displaces 2. 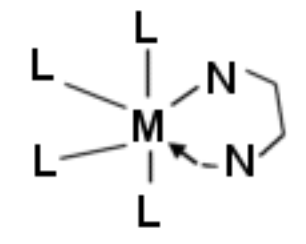 The other N is now nearby to M despite many solvent molecules - intramolecular faster. Relatively, it is highly concentrated.

Hence, we can expect ring size to matter. As the ring increases in size, log K decreases, as once one ligand point is bound, the second is less likely to attach when the chain is longer (further away). They are however notable exceptions seen with 5 and 6 membered chelate rings.

Enthalpy is also favourable because generally polar groups are brought together - part of mutual dipolar repulsions are overcome in forming a ligand.

The chelate effect is also magnified when there are multiple chelating rings, e.g. in EDTA4-.

When relating these to different metals, we must consider the concept of “bite size” of the chelating ligand. In general, this is larger for 5 membered rings than 6, so then 6- membered favours larger metal ions. Also, the bond angle for 5 membered rings (N-M- N) is smaller, so a small metal ion can get closer to the smaller ring.

Macrocyclic ligand complexes are more stable than open chain analogues. Depending on the system, can have favourable ∆S and/or ∆H, although enthalpy generally dominates.

"The more highly hosts and guests are organised for binding and low salvation prior to their complexation, the more stable will be their complex."

Spherands = ligands that are completely preorganised for complexation during synthesis.

One in which coordination of L to at least one metal ion is necessary, either for the reaction to proceed, or to change product distribution in favour of specific compound, e.g. pthalocyanines.

A carbonyl is attacked by an amine, which then loses water.

Metal is coordinated to N.

Control of the reaction is by the size of the template metal-ion used. Small metal cations lead to [1+1] condensations (e.g. Mn2+, Fe2+). Large metals such as Ba2+ give [2+2] macrocyclic products.

Complexation to a metal ion stabilises one component of an equilibrium mixture, shifting the equilibrium to favour formation of the metal complex:

Coordination of the reactive groups to a metal ion which holds these groups (template) in the proper geometry to favour a particular macrocycle. Ring closing reaction:

Freeing ligand is hard. Either:

High dilution conditions. Simultaneous drop-wise addition of reactants A + B to a vigorously stirred large volume solvent over hours/days. Always a low concentration of reactants → cyclisation rather than polymerisation.